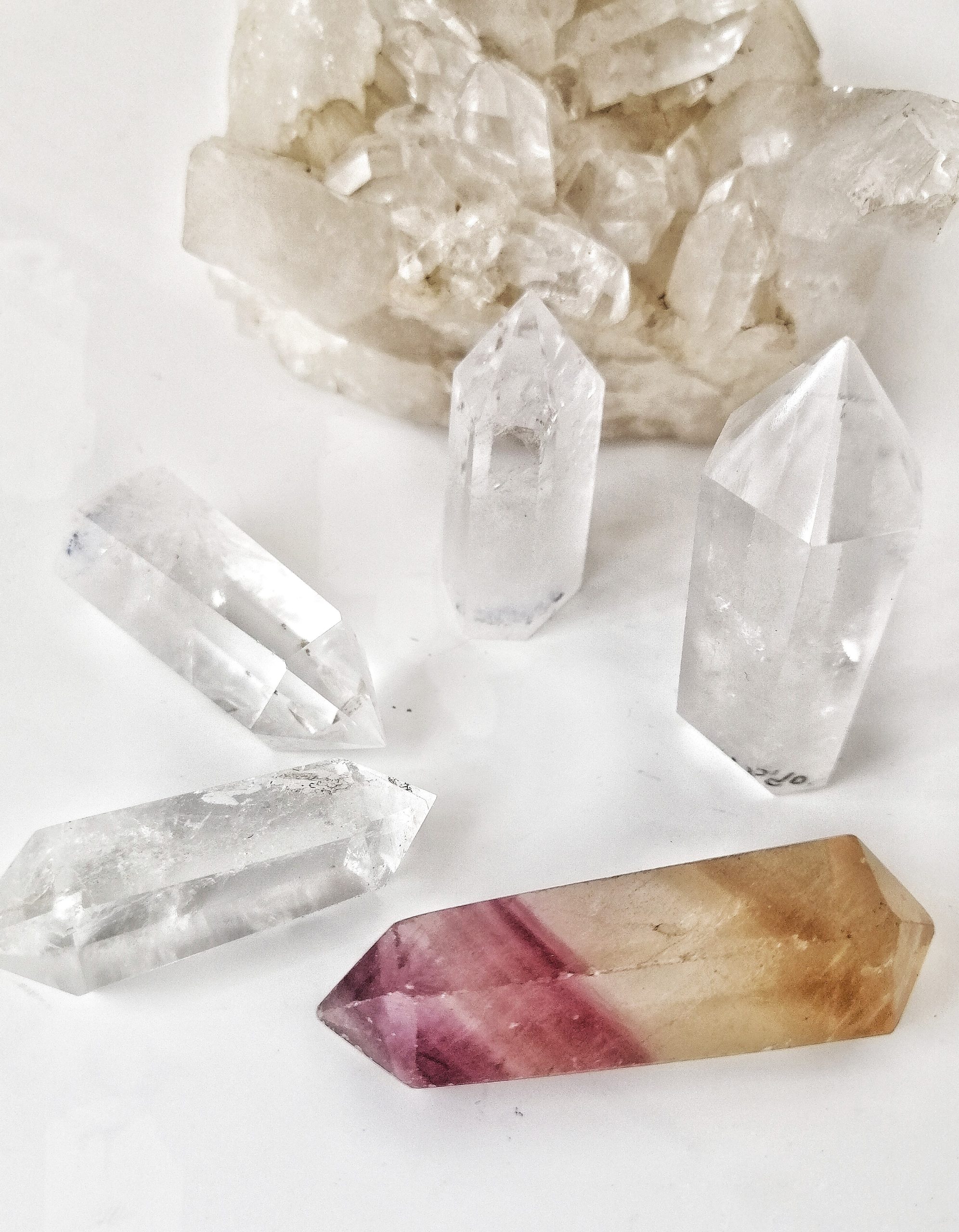 Crystal Quartz Mineral  is one of the most abundant minerals on the earth. It occurs in essentially all mineral environments, and is the constituent of many rocks. It is likewise the maximum varied of all minerals, taking place in all distinct habits, and colorings. There are more range names given to Quartz than any other mineral.

My father was a geologist and geodes, quartzes and minerals were always present in our house. He loved gemstones, jewelry and all kind of minerals. His  interest in observing the surrounding nature was present all the time and he took pleasure in teaching my brother and me the kind of soils, rocks or minerals, while traveling, driving, or strolling. When working at home he enjoyed inviting us to watch the different type of minerals through his microscope. It was fascinating to see the colors and the huge differences among the minerals he was studying or photographing.

Years went by and it never occurred to me I would be designing jewelry. Thirty years after passing, I wish he would be around to guide me and give a more scientific knowledge of the elements with which I work today. But even though he is not helping me I will humbly try to explain a little bit about this beautiful and important element the earth provides us with.

How Do Crystal Quartz Mineral Form?

In the most basic sense, quartz is the crystalline form of silicon dioxide. When quartz grows into large crystals, lapidaries can cut varieties such as rock crystal, smoky quartz, amethyst, or citrine. Quartz can also grow into stones made of tiny microcrystals. In this case, lapidaries can cut chalcedonies, like agate or jasper.

Most quartz forms in either igneous rocks or environments with geothermal waters.

In igneous rocks, quartz forms as magma cools. Like water turning into ice, silicon dioxide will crystallize as it cools. Slow cooling generally allows the crystals to grow larger.

Quartz that grows from silica-rich water forms in a similar way. Silicon dioxide dissolves in water, like sugar in tea, but only at high temperature and pressure. Then, when the temperature or pressure drops, the solution becomes saturated, so quartz crystals form.

How Does Smoky Quartz Form?

Quartz gets smoky brown shades when the rocks around it contain radioactive elements. Over time, the radiation alters the crystal, causing defects…

Sometimes quartz forms such unusual forms that can be mistaken even with diamond. Quartz can occur as beautiful crystals and cryptocrystalline aggregates, where no crystals can be observed, but colorful layers form intriguing patterns.

Quartz is even found in meteorite craters and some varieties can be formed after a meteorite fall. The Quartz family even has its own ‘diamond’, which name is the Herkimer diamond. This variety of quartz form two ended crystals and resemble the diamond’s outline.

Some applications and uses of quartz minerals

We find the use of Quartz minerals in a wide variety of forms, such as jewelry and gemstones, glassmaking, foundry and metal casting, watches and clocks and electronics. They also have use in the production of refractory and petroleum industry, as abrasives, in kitchen countertops, for laboratory crucibles and for sharpening tools. As you can tell this enormous array of possibilities show us the wonderful properties this mineral gives.

Many cultures utilize quartz crystal for healing purposes too. Even though scientific investigations claim this fact has not been proven, many people utilze quartzes and gemstones for healing, protecting   and, or optimizing their energy. Placing them over some of our chacras, some therapists affirm these minerals have the power to revert discomfort and revitalize the person by aligning the chakras and balancing the body’s energy.

I love to believe quartz minerals turned into jewelry provide us both with ornamentation and healing properties. In any case, and until science gets to prove these facts, we may still enjoy crystal quartz minerals beauty:  either by placing them in our homes as decorative talismans  or  by wearing them as jewelry. It is also very important to always trace the ethical procedence of this gift the earth provides us with.

Copyright © 2016. All rights reserved Privacy Policies - Shipping and Handling Policies - Taking Care of your Jewelry
Design by www.Sound-Graph.com
We use cookies on our website to give you the most relevant experience by remembering your preferences and repeat visits. By clicking “Accept”, you consent to the use of ALL the cookies.
Cookie settingsACCEPTREJECT
Manage consent

This website uses cookies to improve your experience while you navigate through the website. Out of these, the cookies that are categorized as necessary are stored on your browser as they are essential for the working of basic functionalities of the website. We also use third-party cookies that help us analyze and understand how you use this website. These cookies will be stored in your browser only with your consent. You also have the option to opt-out of these cookies. But opting out of some of these cookies may affect your browsing experience.
Necessary Always Enabled
Necessary cookies are absolutely essential for the website to function properly. This category only includes cookies that ensures basic functionalities and security features of the website. These cookies do not store any personal information.
Non-necessary
Any cookies that may not be particularly necessary for the website to function and is used specifically to collect user personal data via analytics, ads, other embedded contents are termed as non-necessary cookies. It is mandatory to procure user consent prior to running these cookies on your website.
SAVE & ACCEPT