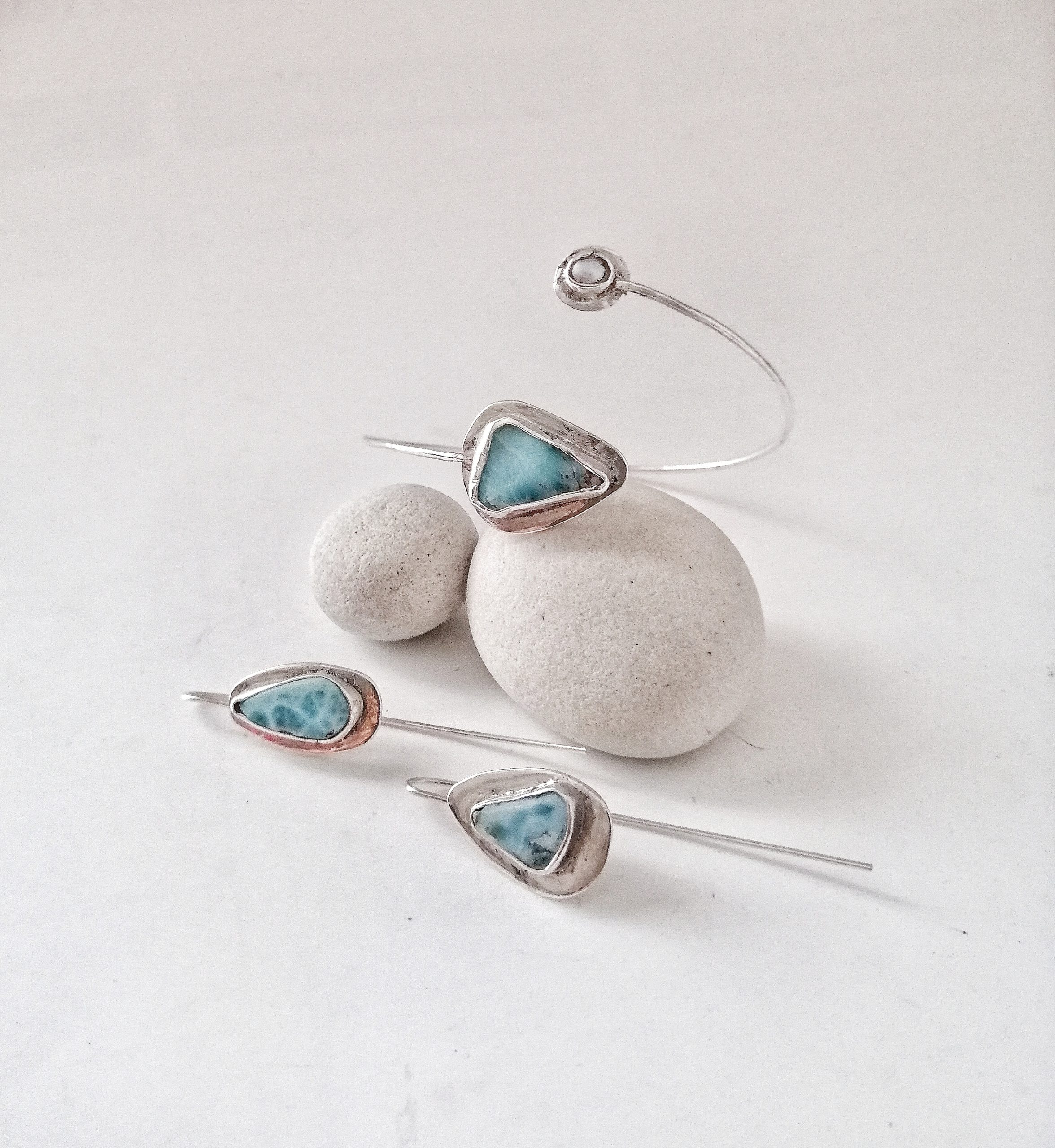 Are you familiar with Larimar?

The Larimar is a semi-precious stone.  It has a vitreous appearance, generally blue speckled with white. Is widely used in jewelry, typical of the southern coast of the Dominican Republic.

Recently I have been craving for the color of this gorgeous semiprecious gemstone, feeling that the clear blue tones will bring back some of the Caribbean Sea  energy to me.  And guess what? It  seems that heavens heard about  my wish, because my daughter, travelled to Dominican Republic and came back  with a  birthday present for me: a tiny  box   full of Larimar cabochons for my jewelry!

Of course, I want to keep them all for me, and yes! I have to sit and design different things I have in mind! But no, not all them will be  for me, some  of the pieces  surely will be in the “one of a kind section“ of my site.

Being this the   first time I’ve been in  touch with this gem has  naturally  led me to move and learn more about the characteristics and history of this beautiful and relatively new  mineral. 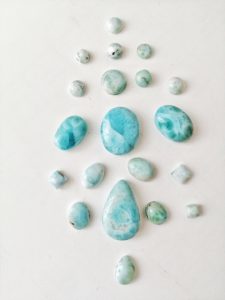 The Dominican Republic’s Ministry of Mining records show  that Father Miguel Domingo Fuertes Loren of the Barahona Parish requests  permission on 22 November 1916 to explore and exploit the mine of a certain blue rock that he had discovered. In the Dominican Republic they did not know what a Pectolites was, so the Ministry rejected the request.

Miguel Méndez and Peace Corps volunteer Norman Rilling rediscovered Larimar in 1974. The  spot was on a beach at the foot of the Bahoruco Mountain Range, the coastal province of Barahona. Natives believed that the stone came from the sea, and they called the gem Blue Stone. Miguel took his young daughter’s name Larissa and the Spanish word for sea (mar) and this is how Larimar word is born, to suggest the colors of the Caribbean Sea where it has being found. The few stones that they first saw were alluvial sediment, washed into the sea by the Bahoruco River. An upstream search reveals the in situ outcrops in the range and soon the Los Chupaderos mine was formed. 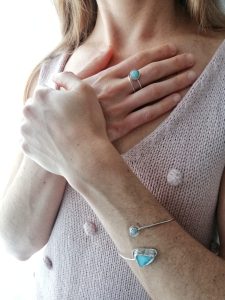 After all this we now know about Larimar we come into  jewelry matter. This semiprecious gemstone sets beautifully  in silver. There are infinite ways to design jewelry with Larimars!  What gets my attention mostly is the connection people say about the spiritual and healing properties Larimar has. Not only does Larimar make beautiful jewelry, but it is also a healing stone that tunes finely  to the human body, in particular, the throat area. Many people use it as  a good luck charm and some other never leave home without it! Today people across the globe use the stone to assist and reinforce healing processes. It is a very spiritual stone with intense, harmonious, feminine energy that encourages positivity and tranquility. 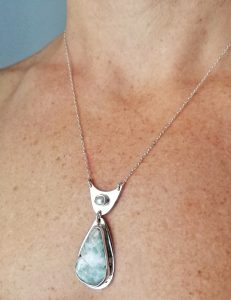 Keep the summer and the Caribbean with you

When I wear  jewelry, one of the things I love most  is to touch, see or  feel the pieces, as much as when I make them in my studio .The  autumn is about to finish, then  follows the longest season for me: winter ! What a  better way  is there to remember  the sea, the sand, the light and the beach horizons than to keep a Larimar jewel in your hands? Memories like the one in the picture below rest in gemstones like Larimar! 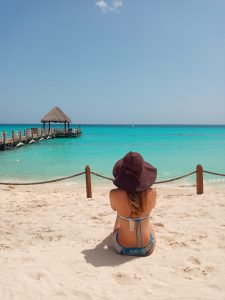 Copyright © 2016. All rights reserved Privacy Policies - Shipping and Handling Policies - Taking Care of your Jewelry
Design by www.Sound-Graph.com
We use cookies on our website to give you the most relevant experience by remembering your preferences and repeat visits. By clicking “Accept”, you consent to the use of ALL the cookies.
Cookie settingsACCEPTREJECT
Manage consent

This website uses cookies to improve your experience while you navigate through the website. Out of these, the cookies that are categorized as necessary are stored on your browser as they are essential for the working of basic functionalities of the website. We also use third-party cookies that help us analyze and understand how you use this website. These cookies will be stored in your browser only with your consent. You also have the option to opt-out of these cookies. But opting out of some of these cookies may affect your browsing experience.
Necessary Always Enabled
Necessary cookies are absolutely essential for the website to function properly. This category only includes cookies that ensures basic functionalities and security features of the website. These cookies do not store any personal information.
Non-necessary
Any cookies that may not be particularly necessary for the website to function and is used specifically to collect user personal data via analytics, ads, other embedded contents are termed as non-necessary cookies. It is mandatory to procure user consent prior to running these cookies on your website.
SAVE & ACCEPT